There are three main types of solar panel in commercial production: monocrystalline, polycrystalline, and amorphous. They all have some advantages and disadvantages, which we will discuss in this article. All three are based on silicon semiconductors - the difference being the form that the silicon is in. Panels based on other chemistries are under development: cadmium telluride and copper indium diselenide panels may well appear in production soon, and research is being conducted on using the photosynthesis effect that plants use to convert sunlight to useful forms of energy. However, you are unlikely to come across technologies other than silicon for the time being, so we will just consider silicon on this page.

It is cheaper to produce silicon wafers in polycrystalline form, as the conditions for growth do not need to be as tightly controlled. In this form, a number of interlocking silicon crystals grow together. Panels based on these cells are cheaper per unit area than monocrystalline panels - but they are also less efficient. In terms of pounds-per-watt, there is not a great deal of difference between the panels.

These are made from thin wafers of silicon, sliced from large crystals that have been grown under carefully controlled conditions. Typically, the cells are a few inches across, and a number of cells are laid out in a grid to create a panel. Relative to the other types of cells, they have a high efficiency, meaning you will generate more electricity from a given area of panel. This is useful if you only have a limited area for mounting your panels, or want to keep the installation small for aesthetic reasons. However, growing large crystals of silicon is a difficult and very energy-intensive process, so the production costs for this type of panel have historically been very high. Production methods have improved, though, and prices have fallen a great deal over the years, partly driven by competition as other types of panel have been produced. Here are a few monocrystalline solar panels that we supply: 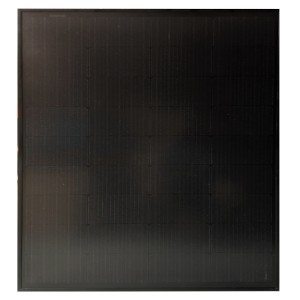 The newest type of panel is based on amorphous silicon. Here, the silicon atoms are not ordered in a crystal lattice at all. The production methods are quite different: instead of growing crystals, the silicon is deposited in a very thin layer on to a backing substrate. Sometimes several layers of silicon, doped in slightly different ways to respond to different wavelengths of light, are laid on top of one another to improve the efficiency. The production methods are complex, but less energy intensive than crystalline panels, and prices should come down as panels are mass produced using this process.

One advantage of using very thin layers of silicon is that the panels can be made flexible. Panels are available that can be curved to the bend in a roof for example, or even attached to a flexible backing sheet so that they can be rolled up and put away when they are not needed! The disadvantage of amorphous panels is that they are not as efficient per unit area as monocrystalline panels - typically you would need nearly double the panel area for the same power output. That said, for a given power rating, they do perform better at low light levels than crystalline panels - which is worth having on a dismal winter's day.

At least one manufacturer now produces a hybrid panel, where a layer of amorphous silicon is deposited on top of single crystal wafers. This gives some of the advantages (high power, but still efficient at low light levels) - and some of the disadvantages (not flexible and relatively high price) of the different types of panels. 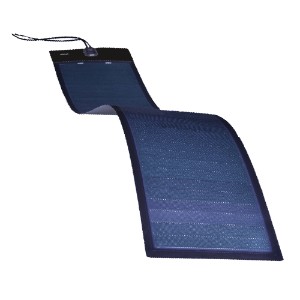 Need to know more? Take a look at: